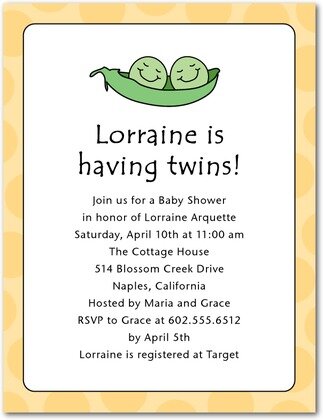 We have lots of creative twin baby shower invitations on this page. The number of new parents welcome multiple babies into their family at one time is skyrocketing all over the globe, so you shouldn’t be too surprised to learn that specially designed invitations are available. If you are throwing a shower for these doubly blessed parents, these invites might just be the perfect choice for your event.

You can also check out these modern baby shower invitations.

The invitation depicts two smiling, sleeping peas nestled together in their pod with a cream colored border.While peas may not be a good theme for a shower, you could coordinate this card with a green color scheme. You may also consider other discount invitations.

Another adorable option, especially if the parents-to-be already know both twins are going to be boys, is the Beary Sweet invitation in aqua. The blue card shows two precious teddy bears next to each other as the focal point of the design.

One benefit of this particular version is that it can work well with lots of shower themes, including blue color schemes and teddy bears. The same card also comes in a dark pink (perfect for twin girls) and in a neutral color which is perfect when the twins are not the same gender or when the sex is unknown.

While most baby shower make raising children seem delightful and precious, parents know that isn’t always the case. The Screaming Twins invitation alludes to this reality while also giving guests and the new parents something to chuckle about.

As the card’s name suggests, it shows two little ones with their mouths open in wide circles as if they were screaming their lungs out.

On this particular version, one twin is wearing a pink shirt and the other is wearing blue so it would work great for parents welcoming both a boy and a girl. You can also purchase these discount invitations in two other varieties: both twins wearing pink shirts or both wearing blue shirts.

As you can see, some twin baby shower invitations were designed specifically for your needs. However, you don’t have to limit yourself to those options. You can also find traditional cards that would work as well. For example, the Following Ducks card shows a large toy duck trailed by two smaller ducks.

Although not intended to celebrate twins, the card could easily be used in that way because of the duo of ducks trailing behind what appears to be the mother. Of course, ducks are also a popular theme for showers.

You could also choose the Bottle Dots card. The invitation features two baby bottles – one in blue and the other in brown.

Because two bottles could represent having two mouths to feed, the card could work for your needs.Keep in mind that if you’re still unsure of the perfect shower theme for the event then you could use baby bottles. They work great and any bottles used as decorations can usually be given to the new parents.

Speaking of baby bottles and of multiple babies, what do you do when you’re throwing shower for someone expecting more than two? Statistics suggest triplets are also on the rise in many parts of the world, including the United States and the United Kingdom.

Well, if you find yourself needing more than twin baby shower invitations one idea is the Blissful Bottles card. This card shows three baby bottles full of milk on backgrounds of different shades of blue. Each bottle could represent another baby.

When you’re thinking of Shower invitations, you sometimes can find exactly what you need or you may have to get a little bit creative. Either way, you’ll have plenty of fun choosing twin invitations for your event.