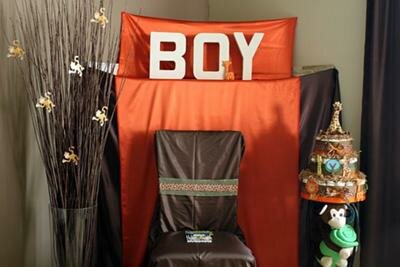 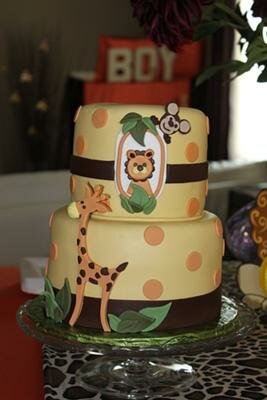 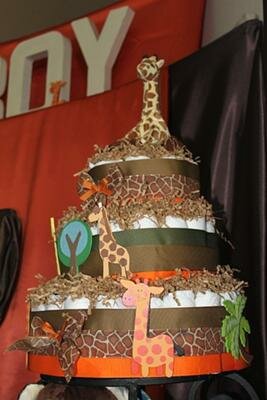 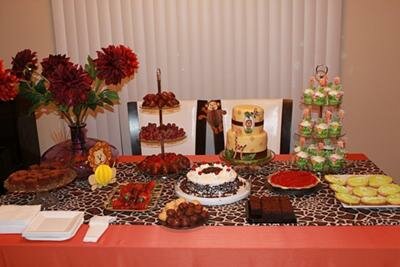 Beautiful safari theme baby shower. My friends house happened to have a zebra print ottoman, so we decided that this would be a appropriate theme and start from there.

We bought some from Hallmark.

The décor: Bought some fabric for a back drop (mommy throne) and used it for a table cloth.
Colors where orange and brown.

Food: we had a dessert table buffet style on the dining table and the hot food was on the counter. It was all buffet style/self serve.
Cake ordered from Simply Sweets in Vancouver WA.

Baby Shower Right and Baby Shower Left - (Materials: a baby shower prize and the following story to be read) - DIRECTIONS: Form a circle with all baby shower participants. Each time you hear the word "right", pass the baby shower wrapped prize to the person on your right. When you hear the word "left", pass the baby shower prize to the person on your left. When you finish this story the person holding the item is the winner of it. Have either the mommy-to-be start the game or choose who holds the prize first. Here is the story to read when playing:

Two of the girls were left-handed so they would sit at the left of the table. Mrs. Wright held up her right hand and all of her friends grew quiet, except the left-handed girl on the right patting Mrs. Wright's dog named Hefty Lefty.

Mrs. Wright began to serve her friends some pie when Grandma Wright smelled the delicious desserts and left her bedroom to join the Wright girls. She went down the stairs and turned left than right, right into Mrs. Wright's family room.

Grandma Wright knocked and entered left and sat in the rocking chair on the left. Sarah Wright and Julie Wright invited Grandma Wright to join them at the table.

Grandma Wright had been to many baby showers as a young girl and right before they realized it, Grandma Wright was telling them a stories from when she was the mommy-to-be and went to the right cabinet and in the left drawer were pictures of her safari theme baby shower.

As the party ended right on time, they all put their dishes right in the left side of the sink and thanked Mrs. Wright and Grandma Wright for such a wonderful time. Soon, all of the women from the Wright baby shower tea party turned right than left, then left again to return to the front door and out to the right car that they arrived in. Down lefty lane they went. Now who ended up with the right gift?


Powder Proof
Collect several of the following powders: baby powder, baking powder, baking soda, flour, dish detergent, clothing detergent, icing sugar, cornstarch. Place a few tablespoons of each powder in a small plastic bag and tie with a ribbon. Write numbers one through 10 on each bag, then make a master list that match the number with the powder. Place the bags of powder on a tray and give each guest a piece of paper and pen. Pass the powders around and have everyone try to guess what type of powder is in each bag! Give a prize to either the guest with the most correct guesses or everyone who guesses baby powder correctly!


Baby Food Taste Test
Buy five to 10 jars of baby food. Write numbers one to 10 on strips of paper or mailing labels and wrap one on each jar to cover the original label. Place the jars on a tray with spoons. Give each guest a piece of paper, pen and small bowl and spoon. Pass each jar around one by one and let everyone taste the baby food, then write down what flavour they think it is. At the end, remove the labels one by one to reveal the food inside. The guest with the most correct guesses wins a prize.

What a great party that full of animals from the Safari! The safari theme baby shower is very popular among the parents-to-be who are fascinated in anything of modern style. We also have a few ideas that use lots of animals: