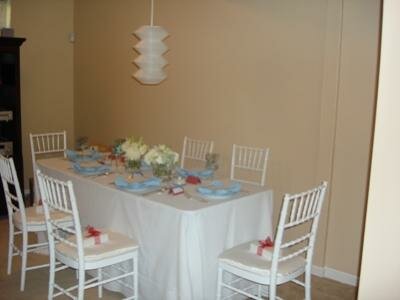 I had a Nautical Chic Baby Shower for my best friend. Since this was her second child and she had the big baby shower for the first, she wanted something small. I decided that I would make it an adult chic oriented baby shower.

The invitations were made by me and said Ahoy their having a boy. I found a small anchor to place on the invitation. People were so excited. I went all out with the decorations and rented two tables with Chivari Chairs(local renting company). I made the menu which consisted of the colors-red, white and blue.(Got all paper products at Micheals) I also ordered blue wine glasses(sparkling cider for mom) and blue napkins. The cake table had spiral branches in blue and white in vases filled with sand.

The cake was all white with with seashells and blue ribbon. From the ceiling I hung white paper latterns. I went to the flower store and picked up all white flowers (didn't matter what type). I got them on sale -check your local florist they normally sell half price flowers after 5:00.

I am in not way a cook. So I ordered a full meal for 12 people from the couples favorite Restaurant. This was a big hit! We also has three seperate white wines.

We only played one game. After I recieved a RSVP's I went online and found the meaning of everyone's first name. I them printed out on seperate cards and put them at the place settings. Each person would read the meaning and then you would have to guess who that person was. Since it was a small group everyone knew everyone else. It made it fun to hear the meaning of your name and see that it pretty much matched with the persons personality.

For Favors I purchases Milkasa Nautical wine stoppers. I wrap each in white wrapping paper and placed a huge red bow on each. Each couple was excited to know that it was something that they could really use.

My friend stated that she loved her chic baby shower and it made her feel like an adult again.