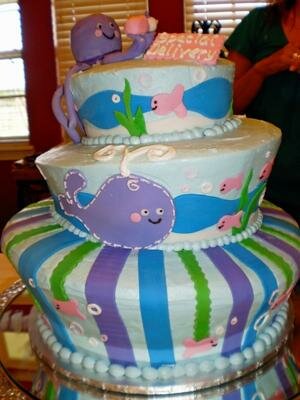 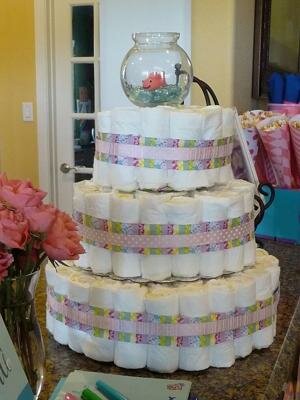 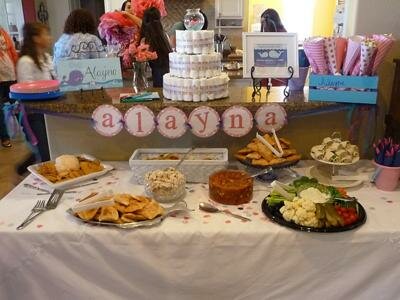 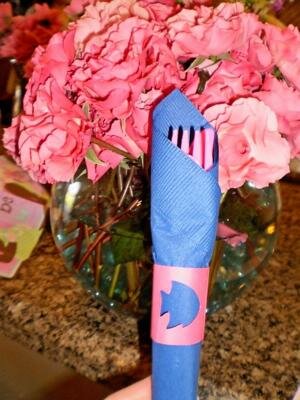 Silverwear Idea-Don't Forget to Put them in Pink Sand Buckets

Here is the full planning of our underwater baby shower.

Our baby girl's nursery is an underwater theme as we live less than 30min. from South Padre Island. My co-worker actually took a picture of the bedding and sent it to an artist who made a door hanger with her name (it also served as a center piece).

The picture was also sent to another co-worker who designed the cake (the top was an octopus holding a baby wrapped in a pink blanket with a sign that said "Special Delivery"). Both matched her room perfectly!

The centerpieces for the tables were filled with blue rocks, water, gorgeous pink flowers, and live Beta fish (which guests could take home). The tables were also covered with paper fish and circles of different sizes and colors (shades of blue and pink).

Pink silverwear were wrapped in bright blue napkins with a pink, paper napkin tie (with the shape of a fish cut out). The napkins were held in little pink sand buckets.

Other decorations: Someone had made an underwater shadow box with her name inside to use as a decoration. A 3-tiered diaper cake with a fish bowl and small fish on top was also used as a decoration. Ocean themed books also decorated the room (i.e. One fish, Two fish; Rainbow Fish, etc).

Guests took home treats with a thank you card (fish shaped), as well as a bookmark that thanked them for attending (placed in a fish bowl).

Underwater baby shower? When I opened the story submitted by Jessica, I was wondering how a baby shower can be thrown under the water. Are these people come from Navy so they know how to eat cake while diving in the ocean???

And when I read the story and looked at these photos, wow! People who like the movie "Nemo" should attend to Jessica's party ;-) And the same concept can be applied to any baby shower that use Pixar movies as the main theme.

UPDATE: Jessica has won our prize as 2010's "Out-of-This-World Shower"!