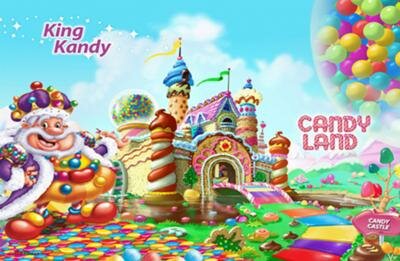 We didn't want to know the sex of our baby. So we went with a baby shower theme that was unisex like Candy Land.

We decorated the outside of the hall with Christmas candy canes on the lawn and spun red ribbon around the columns of the hall to resemble bigger candy canes. We chose different vibrant color table clothes to resemble the board square pieces of the game.

As guest arrived they were greeted by an easel with King Kandy welcoming them to the shower and gave them the game rules of the shower. They were given a gingerbread man paper cut out to find their seats. The bathrooms had big gingerbread cut outs with a game theme to them, "name that baby" where guest can write in possible names for the baby.

For favors we used mini baby sippy cups filled with large gumballs. The appetizers were a chocolate fountain with many fingerfoods to dip with from cookies to strawberries.

The food was set up buffet style. For ice buckets we used colorful plastic sand pails which we later gave to the children that attended as their favors. It was the most unique baby shower I had ever attended.

I think this theme is perfect for a baby shower if you're inviting lots of kids. Also it's also a great idea to throw a Candy Land baby shower in winter holiday season. Some other baby shower ideas include: