Baby Girl Shower in A Box

My mom and older sister have decided to throw my little sister a sweet baby shower.

There was just a slight problem: we all live so far apart.

Summer the mom-to-be, lives on the other side of the U.S. Nevertheless, this will be her first baby: a little baby girl! We were not going to let distance stop us.

We all put our heads together and decided we would give her the Shower she deserved and desperately needed. We came up with the idea of sending her a baby shower in a box.

Here is the copy of the actual invitation wording that we sent out cards to family and friends asking for contributions:

We have been collecting gifts and money to put towards the baby shower in the box.

Once we have all the contributions we are going to send it to her in a great big box.

The Shower in a box will include gift certificates, bibs, clothes, baby accessories, baby shampoo's and lotions, baby finger nail clippers and the many other baby necessities.

We have taken pictures (see below) of the party and are giving her a list of whom contributed what. 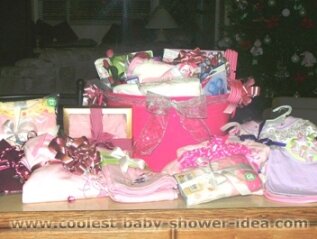 She will then be able to send a thank you card with the picture of the shower to all those who contributed. This lets the people who contributed know that we really did send her a baby shower.

Who would have known that a Shower could be given in a box?

Join in and write your own page! It's easy to do. How?
Simply click here to return to Baby Shower Ideas Contest.