I threw a coed barbecue shower for my brother and sister-law.

We knew that the baby was a boy and we also knew his name was going to be Michael. Since it was the summer and my brother is a huge sports fan, we went with a baseball theme.

I designed and made the invitations. We also used one of the invite pictures and a poem I wrote to decorate one of the cakes.The baby poem went: It's A Boy! It's A Boy! Michael David is his name. Shout it from the Dugout, Put him in the Game! The other cake had the saying "Your the Star Little One" on it to go along with the favors each guest received when they were leaving. 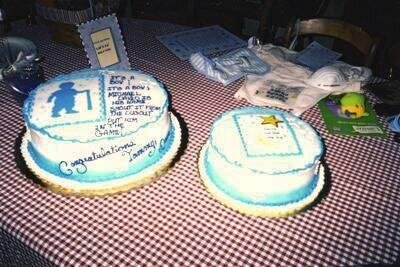 Another idea I had was to put together a "daddy's tool belt" for my brother. I found the idea on the internet (I can't remember what web site). Using my printer and t-shirt paper to create an iron on poem, I ironed the poem onto the cloth tool belt I bought at a local hardware store.

I included all of the baby boy shower items in the poem along with a face mask and an "I Love Daddy" bib. I bought the chocolate "Your a Star Little One" favors on the internet at www.Favors-To-Treasure.com 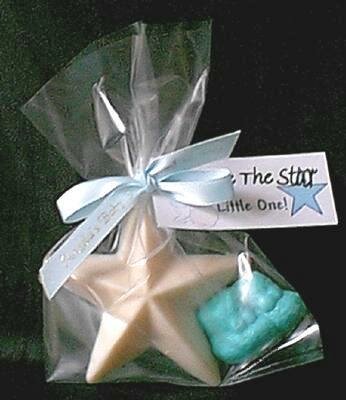 My sister-in-law did not want to play games, so I thought of two other ideas to take the place of games.

One baby boy shower idea was to have door prizes instead of games. The other idea was to create a scrapbook of the shower. The scrapbook was also part of my gifts. The door prizes were two wine and food baskets, one with a Wisconsin Badgers theme and the other with a summer theme. We also went to a local $1 store and purchased picture frames and candles so that everyone walked away with a prize.

Every couple/guest put there names into a baseball hat and we drew names throughout the baby boy shower for the gifts. Two of the small prizes and the two gift baskets were drawn last.

The scrapbook was a great idea. I had pre made pages for the number of couples/guests attending with a few extra. Pictures were taken of each couple/guest. Along with a place for a picture, each page also had a place for each guest to write something to the parents and new baby. Now they have a keepsake to share with Michael when he gets older.

The last thing I made for the boy shower was the "Thank You" notes to match the invitations.

Join in and write your own page! It's easy to do. How?
Simply click here to return to Coolest Baby Shower Contest.